Avian bills are fascinating structures, having evolved a

myriad of forms and functions, as depicted in the montage on the right from: https://en.wikipedia.org/wiki/Beak

Today a new publication on this subject has been published in PLoS One, highlighting the multi-tasking capacity of form and function.  You can find it here and blogged about here.

The authors make the major point that hornbills use their bills like toucans do (as radiators of body heat, showing evidence of greater relative blood flow recruitment at warmer temperatures), but that their calculations suggest that the per area rate of heat exchange in the hornbills is less than the toucans.

This is a nice addition to the recent work done by a number of us in the field (see references below, e.g. Symonds and Tattersall, 2010), emphasizing that bills are not the dead, static structures that many assume they are.

One main point the authors note (they base their comparison mainly vs. toucans from our 2009 paper) is that the bills of hornbills are not as effective as dissipators of heat compared to the toucan and quite likely for multiple reasons: 1) the hornbills’ bill is thicker, so is a heavier barrier to heat exchange, likely because the hornbills use their bills as digging implements and must be more robust, and 2) toucans “switch on” their blood flow at lower temperatures than hornbills, and the lower the air temperature, the greater the driving force for heat loss, and 3) the hornbill bill is relatively smaller than the toucans.  The reason for the hornbill vs. toucan comparison is because the two lineages have long been viewed as old world vs. new world convergences (although that is really an oversimplification).

One point I’d like to emphasize that is often missed in the popular press.  These large billed birds are not unique in their bills’ thermal radiator function, since many other birds exhibit similar capacities to modify blood flow to their bills (geese, ducks, sparrows to name a few).  They are, however, striking in how large their bills are, which is why they garner such attention.

Here is a photograph of a hornbill (what mother could not love that face?): 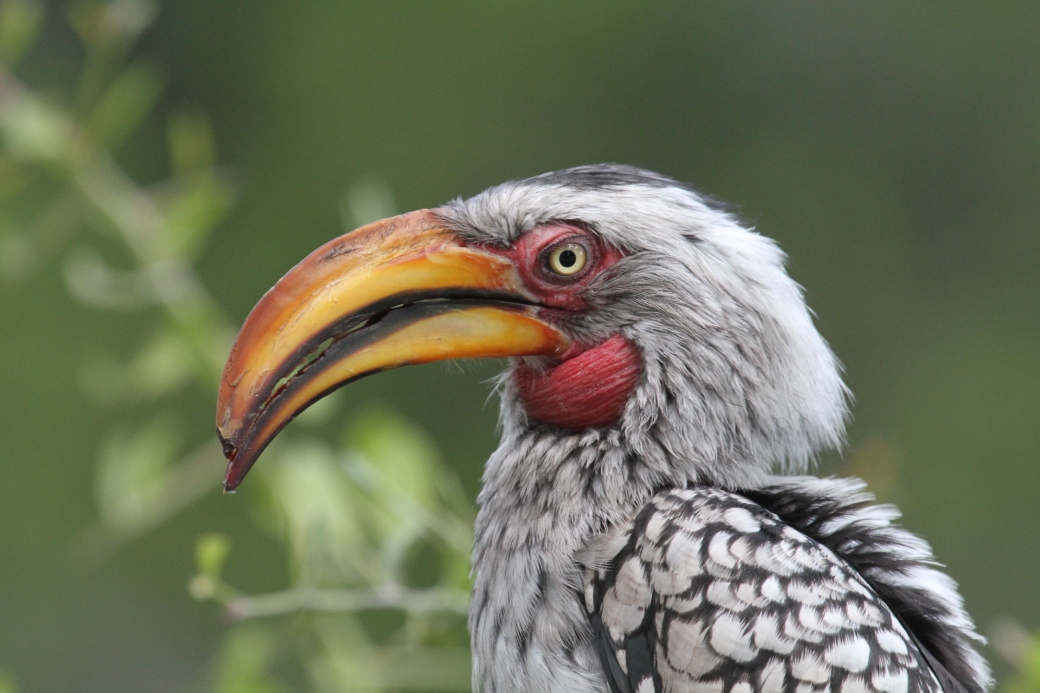 Figure from van de Ven (2016), showing the obvious blood vessels under the surface of the bill.

Some technobabble about how the measurements are made:

Like myself, these researchers used thermal imaging to obtain their results (see their paper for images and thermal videos), which means that heat exchange is an estimation of events and is done under sampling assumptions.  I’ve been working on calculations to make things easier for myself and colleagues (see below for R package), and came across a couple of things.  Firstly, some of the assumptions van de Ven et al (2016) used are different than the ones we made (Tattersall et al 2009).  We assumed higher wind speeds (5 m/s) in our modelling, which I think are a little on the high side of reality.  van de Ven et al (2016) on the other hand, assumed a wind speed of zero and therefore incorporated only free convection estimates.  Gates (2003 – Biophysical Ecology) advises that forced convection is the more realistic scenario for heat exchange in animals since wind speeds are rarely exactly zero, and suggests values between 0.5 and 1 m/s.  This means that van de Ven’s estimates of convective heat will be underestimates, while our toucan data are over-estimates.   Anyhow, the good news is that van de Den realized this when making comparisons to our previous work and made comparisons using free convective heat exchange (while politely not criticizing us for our over-zealous wind speeds).  The take home message though is that their published values for both species are on the low side, while our published values are more for what a flying bird might experience.

For anyone interested in using their thermal images for similar analyses, I have create a package in R called “Thermimage” to help in the calculations.

See https://cran.r-project.org/web/packages/Thermimage/index.html for the package itself and https://github.com/gtatters/Thermimage/blob/master/heatcalc.R for some sample scripts.

Hughes A.L. 2014 Evolution of bill size in relation to body size in toucans and hornbills (Aves: Piciformes and Bucerotiformes). Zoologia-Curitiba 31, 256-263.

I’ve updated the Thermimage package.  The recent update includes calculations for modelling heat transfer from radiative and convective heat transfer from the animal to the environment, using temperatures captured from infrared thermal images.

The assumption is that the user already has temperature information captured and is simply using R to to analyse temperatures.  I am working on scripts for importing FLIR images into R but these are not yet included in Thermimage, since these scripts rely on external applications (EXIFTOOL) that have implementation issues in R.  (Edit: July 20, 2016, v 2.2.0 has a function for importing FLIR thermal jpgs for processing in R)

Thermimage is on Cran now at the following url:

Sample scripts on how to put the heat transfer equations to use are at:

I’ve also included a script to “test” the validity of the thermal image calculations where I convert the binary thermal image data into temperature:

Any issues with the code can be raised here:

It’s been a busy two weeks in the lab, courtesy of my hard working graduate students.  Susan, Justin and Anne presented their thesis research at the Ontario Ecology and Ethology Colloquium last week.  Here are some screen shots of their abstract titles.

Then, this past week, the lab attended the Canadian Society of Zoologists conference to present our research.  Justin and Susan represented the lab work at Brock, while Cayleih Robertson (PhD student of Grant McClelland at McMaster) presented her work (a collaboration I’m happy to be part of).  Everyone gave excellent talks and appeared to enjoy the conference and workshops.

Susan Wang received an honourable mention for the CAS Lindsay Prize for best oral presentation in the Parasitism, Immunity, and Environment section. We’re all very proud of her!

Finally, although Dimitri Skandalis left the lab a number of years ago, I was very pleased that Dimitri received the William S Hoar Award for best overall student presentation at the CSZ this year.    Here is is looking especially happy, as are his past and current supervisors (Left to Right: Darveau, Skandalis, Tattersall, Altschuler).

Congratulations to Ian Black for successfully defending his MSc thesis from research in my lab.   Ian’s thesis was entitled “Orientation Preference and Behavioural Thermoregulatory Coordination in Pogona vitticeps”. 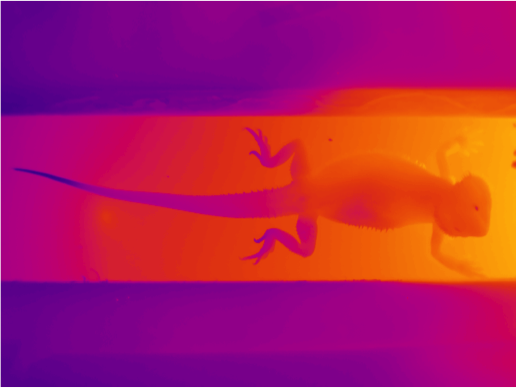 Many thanks to Dr. Jacqueline Litzgus (Laurentian University) for being his external examiner and giving a fair and comprehensive assessment of his work.  Also thanks to Dr. Joffre Mercier, Dr. Robert Carlone and Dr. Alan Castle, committee members and defence committee for their gruelling questions.

I want to take this chance to thank Ian for being a member of the lab and for making it to this stage.  You will always be part of the lab and I wish you all the best in the future.  Enjoy the freedom of reaching a milestone.